Should we be worried about refined sugar?

Let me talk to you about the heavenly, although sometimes fickle, delight that is cashew cream. Oh my. In essence, it is cashew butter with water and a few choice flavourings slowly added to loosen it into a thick, creamy sauce. I initially started making this as an alternative to cream to dollop on breakfasts and desserts by flavouring the cashew butter with vanilla. Then I discovered lime cashew cream. Ahhh…. This zesty sauce just brings savoury dishes to life, injecting sharp flavour into Mexican and South American-inspired dishes. Last week, I drizzled it over vegan enchiladas (recipe from The First Mess; I seriously recommend that you try it, and make the sauce from scratch. Heaven) and this week it has featured on my three bean chilli. As well as adding flavour, a teaspoon or two of cashew cream increases your protein intake (a quarter of a cup of cashews contains 5g protein) without being as high fat as some other nuts and seeds. 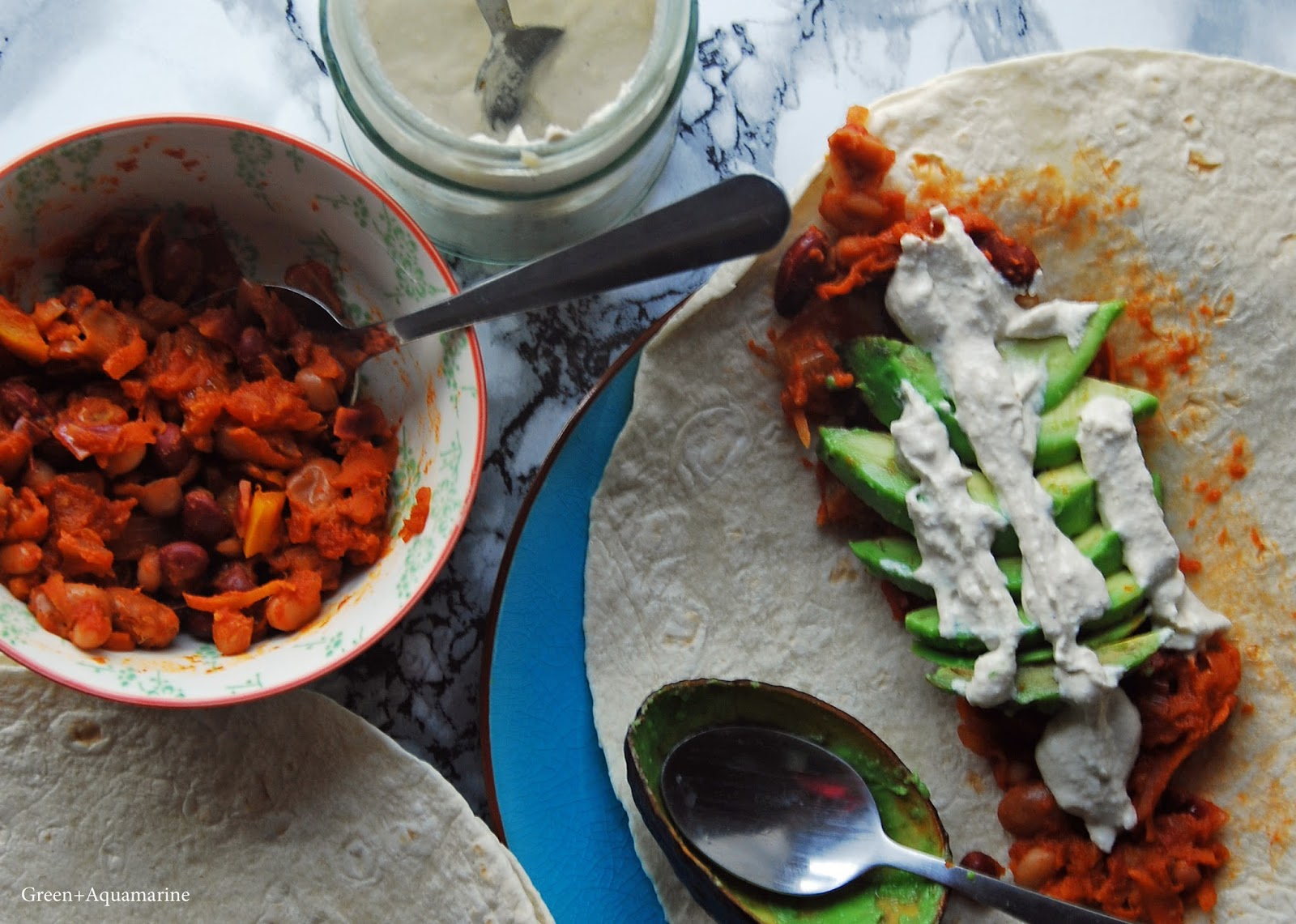 I was once told that it wasn’t worth making a vegetarian or vegan chilli because the taste and texture would never be able to match up to that of good beef mince. And in general, I have held this to be true, with vegetable chills being rather watery, bland affairs despite all the love and attention put into them. I started playing around with textures, using lentils and grated vegetables to emulate the finely ground meat in traditional chilli con carnes. The lentils worked well, but made the dish a little legume heavy if I wanted beans as well. So, after a little tweaking, I came up with this three bean chilli. Without the cashew cream, this dish is seriously kind on your wallet, costing under £5 for a good 4-6 portions and a side. It is a real store cupboard meal too, so perfect for whipping up at the end of the week, or just before payday.

Apologies for the limited photographs here. The lighting has been seriously poor lately (hello tail end of two hurricanes), even when shooting over two lunchtimes. Boo!

Soak the cashews in water, ideally filtered, for two hours. If you are really pressed for time, try at least half an hour of soaking. Drain the cashews, discarding the water, and blend in a food processor under high speed. It should take 5-10 minutes for the nut butter to form. If you are new to cashew butter, don’t be alarmed that the butter is quite dry or “chunky” compared to almond or peanut butter. At a slower speed, begin to add (fresh!) water, until you have the consistency of thick double cream. Add the juice from the lime to taste -you shouldn’t need the entire lime. As an option, you can also add the zest of the lime to the cream. You are looking for a completely smooth cream, but using a less powerful blender or adding the water too soon can yield a grainy texture. It won’t be quite as amazing if this happens, but will still taste delicious. 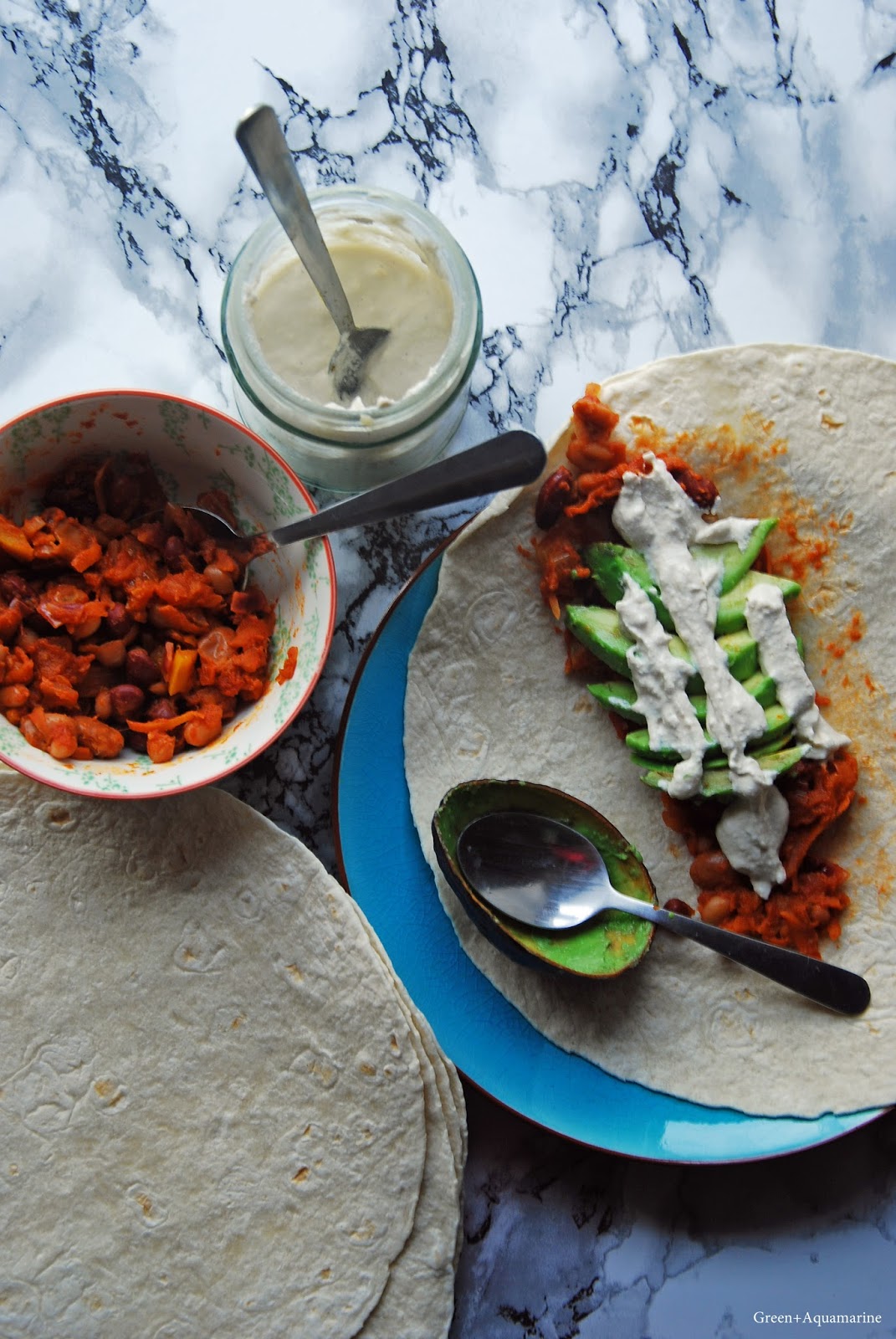 Finely chop the onion, and add it to a pan with a tablespoon or so of olive or coconut oil. Pop the lid on to sauté for five minutes until translucent. Meanwhile, prepare the celery and pepper/vegetables by chopping them finely once again. Grate the carrots.
When the onion is cooked, but not catching, add the onions and spices, turning the heat up slightly. Cook for a further minute or two before adding the celery and pepper. Allowing the vegetables to lightly cook in the oil rather than the chopped tomatoes or water really helps to capture the full flavour of the ingredients. After a further five minutes, add the tomato puree or sundried tomatoes, and then the carrots and chopped tomatoes. Allow to simmer with the lid off for 30-40 minutes, putting the lid back on if the liquid has reduced by more than a half. Rinse the beans out thoroughly and allow to drain. Once the sauce has cooked and reduced, add the beans and cook for a further ten minutes until everything is piping hot.
Serve with rice or wraps, with avocado and lime cashew cream on the side.